A Walk in Druid Hill Park 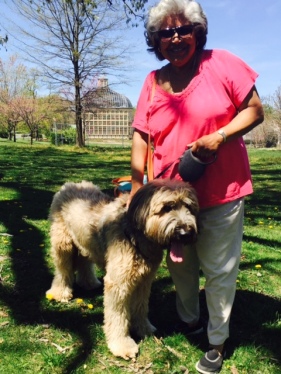 I met two interesting beings on a sunny noon-time walk today in Baltimore’s famous Druid Hill Park:  Olivia and her dog, Foley.  They  live  a short drive from the park in the city community of Mondawmin.  My office is just  few blocks from the park in the Reservoir Lake (part of the park) community.

The park is enjoying a revival as the historical center of Baltimore.  It is the third oldest (1860) urban park in America after Central Park in New York (1858), and Fairmount Park in Philadelphia (1812).

Foley was a very friendly dog. I told Olivia that  my next door neighbor, Mr Donovan, had a big dog just like Foley who was very friendly too and asked if she had run into them.  She said, “Oh yes, Foley does not like Arthur (Mr. Donovan’s dog) at all!  Something about being the biggest dog in town, I guess.

“What kind of dogs are Foley and Arthur anyway,” I wondered. “Foley’s breed is a Briard,” just like Arthur, she said.  I couldn’t stop laughing, not just because of the funny alliteration. “Briad sounds like the name I suggested to Raymond for his cool beard in a recent post–“BreeArd.”

She let me take a picture of her and Foley before we went on our way. I asked if she knew how “Druid” became the name of the park. “No idea,” she said.

After some digging, I discovered that “Druid” seemed to be an homage to the 12th century Scottish heritage of the original owner and Shepard of the e 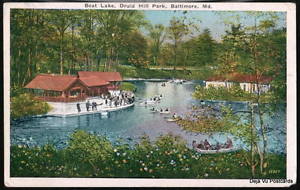 state  in the 1700s, George Buchanan.  (original boat house lake shown, now part of the park’s zoo) He was one of seven commissioners who established Baltimore City in 1729.  The city paid for the park land with a one cent tax on the nickle of horse-drawn street car fares.