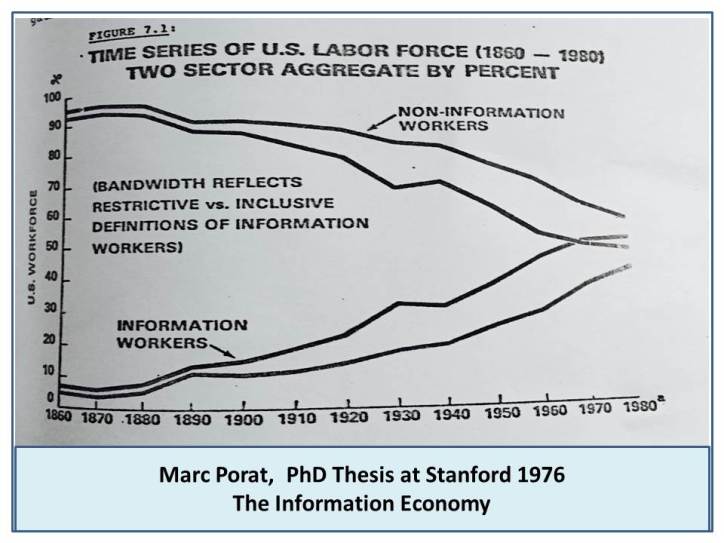 labor mix was 50/50 four decades ago. Now it’s at least 90/10. Where is America’s new economic model for the FrictionLessSociety (FLS)?

Change is happening so fast in the FLS that I have decided to use a pseudonym–#ChaunceySays—to aggregate and track tweet snippets of FLS insights as they occur from the news, my research, consulting, and writing projects.

My problem was that both private and public FLS insights are surfacing faster than I can track them, much less expand them into essays; this was taking me away from my research and writing projects, so I decided to let random FLS insight tweets fly, whether from me or others (with attribution), on their own under the “#ChaunceySays” banner.  I will continue to post occasional essays linked to tweets about my FLS projects on about a weekly basis for feedback and comment.

I encourage others to use “#ChaunceySays” to post tweets of their FLS insights on the accelerating change to help aggregate and track issues that are reshaping who we are and how we live.

I derived the “ChaunceySays” pseudonym from Chauncey Gardner, the main character in the classic 1970s novel and movie,  Being There. I chose Chauncey because he is like a perfect mirror that reflects truthful insights from everyone he meets, unbeknownst to either them or to himself.

The movie stars Peter Sellers as Chance the gardener whose name was misheard as “Chauncey Gardner” when he accidentally sneezed as he was introducing himself to a stranger.  Thereafter, Chance responded as “Chauncey” in all subsequent conversations without a glimmer of a thought that anything was wrong.

Here is the joke: While Chauncey lived in bliss with no self-awareness whatsoever, the “normal” people he encountered, who presumed to have highly developed senses of self-awareness and worldly knowledge, were so into themselves they were totally unaware that Chauncey had no idea what they were talking about.  So these people projected their issues onto Chauncey and gave him all the credit for helping them through their problems as he mirrored their complaints politely back to them when all he was doing was just … “being there”… in a state of bliss.

From an FLS perspective, I was also attracted to Chauncey as a pseudonym because he gives us an example of a fully autonomous AI robot that can do many human-like things but is clearly not human. The other FLS reason I chose “Chauncey” was that the mid 1970s period (1976, to be exact) was when America crossed the 50/50 tipping point from an industrial economy to an information economy—the time when our FrictionLessSociety had clearly begun (see graph above of 50/50 transition point from Marc Porat’s PhD thesis at Stanford in 1976).

All of today’s economic problems and opportunities were revealed in this early work.  Unfortunately, “opportunity” received primary focus during the following 40 years leaving today’s society to play catch up on solving the problems of a maturing knowledge-based economy.

If anyone  knows of a coherent economic model for understanding how the knowledge economy works as a follow-on to Porat’s work I would very much like to examine it.

1 thought on “#ChaunceySays: Where is the Knowledge Economy Model for the FLS?”