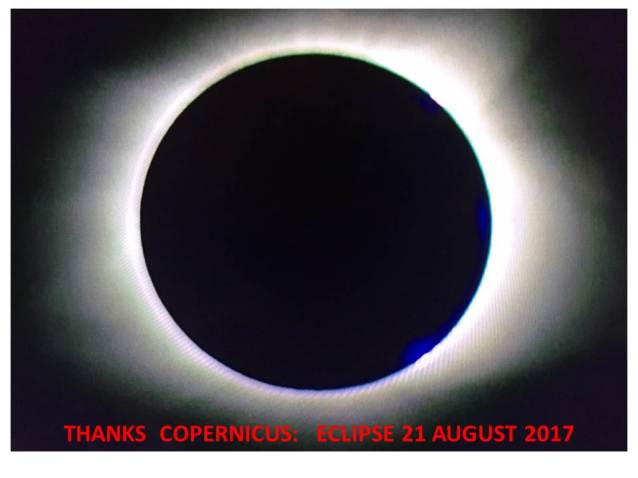 Notes as I Watched Eclipse on August 21

Copernicus Was Important in My Life

I turned off the TV, took a deep breath and began to reflect on what I had just experienced. Copernicus would be a rock star today, I thought, with his own facebook page and astrocat.

What was my epiphany telling me?  I knew the story, as most people, of how Copernicus got credit for telling the world that the earth revolves around the sun and not the other way around as previously thought for 1500 years.  What most people probably don’t know is that Copernicus waited about 33 years before he published his revolutionary new idea until he was on his deathbed at 70 because he feared for his life from speaking truth to power.

The Copernican model of the universe (earth revolving around the sun instead of the opposite) was the tipping point of history that started the Scientific “Object” Revolution.  This view has lasted for 500 years and is still the commonly accepted paradigm of reality for most people for a good reason:  we experience reality as things bouncing off from each other. It is being replaced by the Scientific “INFO” Revolution, which needs a fundamental theory of quantum physics to complete, and one does not exist.

Since 1900 the “object” view of reality has been gradually melting away in front of our eyes as science and technology has probed deeper into nature to systematically reveal a deeper reality beyond our senses in the form of information patterns describing what we experience as “hard objects” with our crude senses.

The deeper we probe the more our probing interferes with what we are trying to measure, and so limits what we can learn from our probing.  Maybe probing of the scientific method is not the way to go!  This has been the problem with  quantum mechanic ad hoc recipes  since 1900, regardless of how well they work for some cases. There is no fundamental understanding of quantum mechanics as it is conceived today, although some groups are starting from scratch to rebuild a quantum theory from axioms.

The revolution Copernicus started led to the Science Revolution, a new method of truth discovery, which today has led to all observed “things” that are now being reduced to their information patterns and vice versa.

Copernicus was directly and indirectly responsible for these two major new paradigm shifts in how reality has been viewed over the last thousand years. Congrats Copernicus!

Back to Eclipse and Notes

After I finished reading my Eclipse and Copernicus historical notes, my mind suddenly jumped back in history to when I had to “speak truth to power” myself to start my own business as a young man in my late 20s.

I had started out working as a research physicist as an employee-owner of SAI in California, and eventually became a technology business strategist who generated new ideas and developed them as algorithms for clients concerned with big headline issues of the time. I had many out-of-the-box ideas outside the mainstream focus in the company and began thinking of going out on my own after working at SAI while it grew from $250k when I joined to $100 million in annual sales when I left as an employee.  (SAI was my first client and remain so for 35 years.)

I began to think about Copernicus from my physics PhD education as I contemplated starting my own firm. What would he do in my situation?  Speaking truth to power is what he eventually did late in his life with his revolutionary idea; however, he would be facing death for thinking out of the box.  I would only be losing money by speaking “my truth” to the power of “common beliefs” of my  peers if people did not like my ideas. My bigger risk would be opportunity cost. When would there be a better time to take this leap?

I was primed ready for my leap into the unknown. I had money from my stock, SAI signed up to be my first client to finish work I had been doing.  I had many out-of-the box ideas for different markets.  I wanted to learn how to develop them for a wide variety of business clients. How could this not work out? Of course, I would learn that starting a new business is much harder than it looked on the surface.

My naive business model on my first solo venture, was simply to buy a building and fill it with business because that is what we employee-owners had been doing at SAI without owning the office space. Why not complete the puzzle; get the tax shelter and investment benefits of owning the real estate your company occupies?

As I was pondering my venture, my dad died suddenly in his early 60s shortly after retiring; so much for waiting for the good life.  This probably helped push me over the edge to act on my dreams then and there.  So, four decades ago, I started my company (I actually incorporated three different companies at the same time for three different categories of ways to make money from ideas—high labor-rate professional advice, high-margin of repeat-idea use, and high-volume sales per idea) against much well-meaning professional and personal advice.

There I was staring at walls sitting in an empty two-story office building in McLean VA that I had just purchased when prime interest rates were 20%.  I contemplated what I had done after everyone I talked to had advised me not to do it.  I remember thinking:

All of my business associates and friends who advised me not to do this are not me and I am not them; I am me with my unique life experiences and knowledge; I have ideas; I have been paid well for my ideas; I have more ideas; so, I should be paid well again for my ideas in MY first company – RJH Ltd.  If I fall flat on my face for any reason, I won’t die.  If I don’t find and follow my dreams no one will give them to me.  I won’t find them on a shelf in a store somewhere for me to buy, but I might die inside without trying.

Feeling an equal measure of fear and excitement about the unknown I was moving into, I poured my resolve and emotion of the moment into this founding statement as a rhetorical reminder of why I was going out on my own:

I was going to post this entire essay on the day of the eclipse in appreciation of Copernicus. But I did not finish it until now because it took on a life of its own. Instead, I included my eclipse photo with my founding statement as my tweet text to go with the photo on August 21.

Surprisingly, the text was just within the 140 character the twitter limit (this was way before the Internet), but long enough to establish an enduring business principle I have used all my life.  I am surprised, and pleased, that this tweet posted 18 days ago keeps getting new views with an 8.1% engagement rate compared to an average of less than 1% without a link pointing to a related blog essay.

My founding statement became my philosophy of life that has stood the test of time for me, and continues to motivate me; however I was to learn that it required serious L3, Life-Long-Learning (even with a PhD), at an accelerating pace.

This was okay with me because I love to learn. During the last four decades, my self-learning cycle time that is necessary for me to stay ahead strategically in the new idea business has shrunk from years to months to weeks to daily, and is now approaching zero, or continuously, as we move full speed into our rapidly emerging #FrictionLessSociety.  More about this trend will be tweeted, and expanded in my future blogs and tweets.

2 thoughts on “Thanks Copernicus”