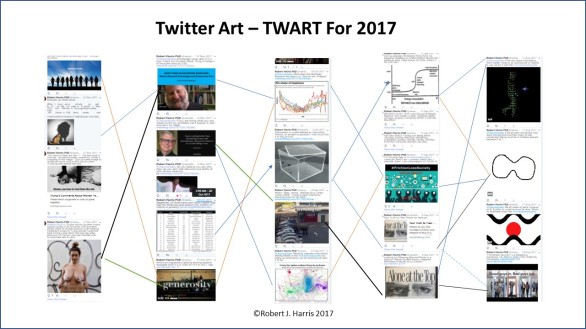 This is my first report to readers whose interest in my writing has motivated me to continue it. Here, I introduce a new word, “TWART,” for Twitter Art that I adopted to describe my style of writing in tweets which also points to my blogs. www.wordnik.com/words/twart.

Famed architect William McDonough has famously proclaimed for decades that “the first sign of human intent is design.”  His passionate claim is a very clever tagline by a very clever architect in our clever times. However, before there were clever architects for clever times, there was the original very clever human discovery of conscious self-awareness.  A more primal event than marketing preceded modern human desire to design and build things.  That event was the amazing discovery at least 50,000 years ago by a lone person, a discovery which we take for granted today:

The astonishing ability of humans to convert a private thought from their mind into a representation of it outside of their mind for others to experience. This primal experience is the primal Art of human creation.

Every human can automatically experience this miracle from early childhood.

Imagine the first time a cave dwelling proto-human sketched a crude drawing on her cave wall, perhaps in Spain, of an image frozen in her mind of a charging prehistoric elephant for others to see! She discovered that she could make her intangible private experience a tangible public picture for others to see and contemplate. 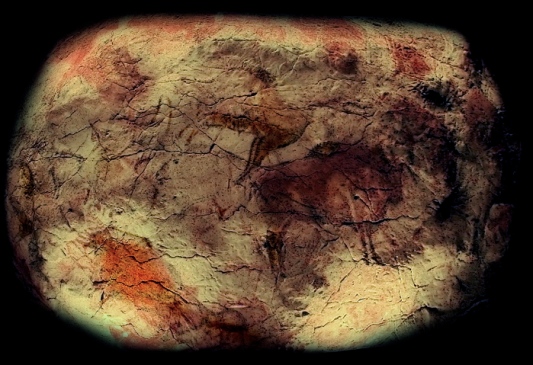 This is the way “art” has been up until the digital revolution began in earnest about 20 years ago. Since then, we have learned to move seamlessly between the tangible and intangible in either direction by manipulating information at its primal level of digital bits, and to do it at near the speed of light. This is the #FrictionLessSociety™ we are building bit by bit. It is a fundamentally new reality we are all trying to adjust to.

Increasingly, we can convert static intangible “frozen” thoughts into “liquid” information, which we can then design and build into tangible artifacts; what tangible artifacts we can design and build by any means, we can also convert back into intangible “liquid“ information to move or store for later use. This line of thought raises the question:  What is our new “art” for the #FrictionLessSociety™ of the digital age?

This brings us back to the fundamental question of “Why Art, anyway?”  Why do we need it? What is its purpose?  How does art’s existence improve our chance of survival?

I argue that “art” is necessary to give life meaning as life gets buffeted about by persistent change that is fueled by the constant clash between the forces of order and chaos. We shift from “lower” paradigm to the next “higher” paradigm in a constant search for the next stable view of  reality, a search that gets more difficult as life accelerates.  Our expression of art must change as the circumstances of our existence changes to keep us in sane balance–and it does.

Our world is being glued together by technological media that is both tangible and intangible. [Isn’t “tangible” just a first approximation to “intangible?”] If the technological media that stores and moves intangible information knowledge is generally called Social Media, the creative content of that current life of social media could be defined generally as social media art, or SociArt, or Frictionless art—SlikArt.  Subcategories of this new form of art for the digital age include the following familiar examples:

Amazon uses information to store, move and manage stuff with the world’s most dominant web cloud service.  Its Amazon Prime is an example of its stuff-to-people business: S2PArt.

Google connects people mail to other people mail, as well as gives their questions answers, all for “free” in exchange for knowing and tracking everything you do and when & where you do it—P2PArt.  First version was TxtArt, which became voice art, or V2VArt, which combined with YouTube to become TV shorts, tvArt , and soon will become full 3D live representations of reality created by Artificial General Intelligence, or AgiART.

Apple (& imitators) makes the devices that do the end point connecting–AppArt.

Verizon, AT&T, and Comcast provide most of the wired/wireless end-to-end communication pipes and entertainment content—E2EArt.

Uber allows people to use information and their own car to find and move other people locally to places they want to be—TaxiArt (Conventional taxi service is top-down rigid corporate mechanical art; Uber and Lyft are bottom-up creative art, a flexible solution satisfying the same need.)

WordPress is the self-publishing platform for individuals and companies–PubArt.

Twitter is a digital loudspeaker that amplifies an individual’s thoughts to all other birds in the human flock hoping to create some waves.

I am one of those birds with my particular view of how the future is unfolding; I have come to think of Twitter as the town crier megaphone of the digital age:

Tweets give us, among other things, snippets of meaning for the new age of the #FrictionLessSociety™.  We are learning to live comfortably in a new reality defined by the perpetually gray region of our imagination where anything seems possible, poised between almost perfect order and almost perfect chaos (future post) .

I have named each snippet of meaning Twitter art, or TWART.

Like the word “spear” or “value” the new word “Twart” is highly flexible since it can be used as both a noun and a verb, and is both a static and dynamic concept.  Examples:

(Some of the time I am the “character” talking in first person as authentically as I know how; other times the character of my story is my alter-ego in the voice of Chauncey Gardener talking as “#ChaunceySays”—the leading character of the book and movie, Being There, played by Peter Sellers, whose simple state of mind was an ocean of possibilities.)

In 2013, after 30+ years of working privately for clients from my own company (Paradigm Research) as a strategy consultant I decided one day on a whim that I just wanted to work publically as a writer for myself and the world. I said this as a half-serious joke when a close friend asked me what I was going to do next, and the idea stuck. Ideas are like that; they can sneak up unbidden to whisper and tell you what to do next if you can turn down the noise to hear them speak.

After a 30+ year career of privately thinking, marketing, educating, writing, and problem solving for clients in the USA and abroad as a strategy consultant for startups to Fortune 100 organizations I decided to stand back in 2013 and assess what I had learned, see where the world was going, and explore how I wanted to contribute as an individual the rest of my life. I had ridden the explosive wave of technological change since computer use had spread into wide public use in the mid-1970s. I was part of it as it morphed into the new age of #FrictionLessSociety™.

FRICTION means RESTRICTION, the continuum between the ideals of absolute CONTROL and absolute FREEDOM. Digital technology has sped up information flow throughout society so much during the last 40 years that “information friction” is now approaching zero and transforming humans into a #FrictionLessSociety.

I could see the outlines of how society was changing fast and wanted to figure it out, and contribute in a public way that was undefined at the time. My key thought was the fundamental way in which “information” qua information was redefining reality, its meanings, and it’s potential for the good and the not so good.

I knew from physics that the “good” from a slow-burning fireplace log is the close cousin of the “bad” from an explosion caused by a match thrown into a puddle of liquid gas; “explosion” is just a very a fast rate of burning-, or “temporary order” instantly becoming chaos before descending into stasis. (average current burn time for humans is 80 years)

I could see information flares sparking digital fires throughout the world economy and cultures—some for warmth and safety, some for harm and danger— as we all tried to adjust to our compressed new world of interconnectedness. I started a research program to delve into the heart  of information technology that revolved around the development of artificial general intelligence (AGI).

I decided to start a blog about these flares as “slices of life as I found them” to see if anyone was listening and cared. I taught myself how to use WordPress and built a three-blog website now accessible as https://viewshift.net. I shared what I was learning by conducting workshops on for students about to enter the rapidly-changing workforce of the #FrictionLessSociety™.  We learned from each other.

Armed with continuously updated knowledge on how the world was profoundly changing socially and scientifically, I began offering new insights to top executives to help keep them current on how the latest developments in Artificial Intelligence and related innovations of the #FrictionLessSociety™ that would impact their business.  I also conducted educational workshops on topics from my blogs for local organizations and other groups where new problems and untapped talent exists.

In 2014 I added two additional blogs to my new website to address two new slices of life: “Work as I find it” and “Meaning as I find it” because the nature of “work” and “meaning” were both changing rapidly in the #FrictionLessSociety™.  In 2015 I added my twitter account into my writing as an experiment.

I had signed up for a twitter account in 2014 to locate a young man who worked for me 20 years ago and moved on to chase his fortunes at Wall Street.  Sure enough, he popped up in a Greek Mediterranean island where he managed his own investment firm living the good life.

My tweet-blog experiment was to see if I could set up a resonance between my twitter feed and my blog essays  for readers (as well as cross talk among my three blogs on Life, Work and Meaning). People are taking less and less time to process faster and faster floods of more and more important information. My gut told me that “meaning” was bound to suffer in this situation at a confusing time of profound change when meaning is most needed. Maybe I could interact with more people if each tweet pointed to my blog essays and vice versa, and my blogs “talked” to each other in their own unique voices (under development).

On Twitter I would summarize my essay as a Twark with a catchy headline and visual followed by a link pointing to the full essay in my blogs about half the time.  The essays average about 800 words compared to the tweets of 240 words max.

Here is what I happened: I posted 93 Twarks during 2015 – 2018, 63 of them in 2017, with about half of these pointing to essays in my blogs that expanded on a Twark theme. The number of Tweet impressions per Twark started in low hundreds and increased exponentially to thousands each for a total of almost 100,000 through January of 2018. The engagement rate was about 1% with no link pointing to an essay, and about 2.5% with an essay link.  The engagement rate for the top 25 advertised brands on Twitter is 0.07%.

What’s most important is that old Twarts continue to gain impressions and engagements long after their time in the spotlight has passed, indicating people (existing and new readers) are going back to rediscover and/or revisit old themes.  I believe this is because all themes are tightly interrelated and revolve around the same core issue of new meanings in the #FrictionLessSociety™. This is indicated by the intersecting lines of the tweet images in the opening graphic.

In terms of most viewed topics here are the top-ranked themes of my Twarks for the last year by #impressions weighted by  #engagements (basically, how many times a topic was clicked on initially times how much it was explored with additional clicks):

Thank you all very much for taking time to consider my thoughts and give feedback.