#TrueStory: On a sunny walk this morning I met a spry 6’4″ older man I’ve seen before with a large varnished walking stick I had NOT SEEN before. All of his sticks have different designs, and are about 1.5″ thick & rise up to his bearded chin.

[private thought: Where are the sheep?]”

How many sticks in your flock, I ask cheekily? He looks me in the eye with steely resolve and replies: Not many now; I’m down to 25!

(How MANY and what KIND of walking sticks are needed in one’s uncertain  life journey?)

This brief encounter started me thinking as I  parted ways to walk my path alone. My attention bolted from the present moment, as it often does on walks, into the outer space of my inner mind in “big picture” world where I float and notions come to me. Suddenly an image like the above picture shimmered to life in my mind and reminded me of Shakespeare. This bearded guy could be Shakespeare’s long lost cousin, I mused, pondering “meanings” at his time while he tended his flock. What was he thinking?

As he looked at his goats grazing at the dawn of civilization, Shakespeare’s prehistoric cousin might have mumbled in his primitive language to himself, with a chuckle:

THAT might have been the first primitive binary thought ever asked, and one that repeats to this day. This may not have been very elegant expression, and was probably just a vague and fleeting notion, but it was a raw authentic start for his time and place. That feeling would have been his life experience, and pretty much summed up where he stood, given what little time he had to ponder instead of worrying about saber tooth tigers or enemy tribes.

Suddenly, I am zooming ten thousand years ahead to the 16th century where I encounter the real Shakespeare who got the full meaning of this primal question right with these ten immortal words:

To be or not to be, that is the question.

He was giving Prince Hamlet words to say in his opening soliloquy of the play “Hamlet” as Hamlet pondered suicide because things were not going his way (poor little Prince). At the core of his dilemma was an EXISTENTIAL BINARY CHOICE: To face his troubles and ACT or to take the passive choice and accept death’s seductive offer for the easy way out.  The issue was simpler in his cousin’s time because survival was a constant and paramount issue every second of every day; his possible death was always so close I’m guessing killing himself was not even a personal option to consider.

“BEING” is choosing the known burdens of SURVIVAL.

“NOT BEING” is to choosing the unknowns of DEATH.

So the existential binary question of Shakespeare’s cousin revolves around his choice of the moment: to BE a herdEE (member of the herd following “herd rules,”) or to BE a herdER (the one making and enforcing the herd rules)?  Like the modern humans we became, this primitive cousin wanted to have it both  a little of both ways, depending on where he was in his life. This persistent conflicting desire of an individual was the end of absolute objectivity and the beginning of political persuasion.

The no-herd CHOICE is a singular tweener, a moving fulcrum of power metaphorically, that tries to maintain dynamic balance on the longest conceptual See-Saw of human history, one whose balance point is in constant motion between the two extremes of FREEDOM and CONTROL; to do exactly what, when, and how you want to do (and be virtually alone), or to get as much of the WWH as you can while being part of the herd.

For most of the last ten thousand years AUTOCRATIC CONTROL has dominated FREEDOM, probably because MIGHT MAKES RIGHT has been the prime organization principle for survival in a brutal world of existence since the first reproducing cell flickered to life 4 billion years ago.

Life learned from experience and taught us that extremes on the Seesaw of life did not support life but extinguished it. The grand principle at work could be stated simply as this:

>TOO MUCH FREEDOM AND YOU CAN DIE OF TOO MUCH EXCITEMENT.

>TOO MUCH CONTROL AND YOU CAN DIE FROM TOO MUCH BOREDOM.

Who would think today that over half of earth’s 190 herds (nations), totalling almost 8 billion people, are making individual choices to create a coherent, stable and dynamic whole as a self-referencing, self-correcting living system? It’s messy but it is happening in fits and starts, and has grown to 50%+ of the nation-herds make choices by representative voting yearly.
We know this kind of magical self-coordination can happen because 37 trillion cells in each human body work together, mostly silently, to maintain human stability and awareness every moment. This has been going on in us for a million years – which is literally only 1% of life’s existence! So it not a new idea;  only new to our way of thinking.
Whenever big change like this happens this fast (from a biological perspective), it will take time to iron out the wrinkles through experience. Our wrinkles are big because this change is big, and includes major conflicts such as: wars, recessions, xenophobia, equal justice, and random killings over differences; but these are problems to be solved for all to reap the benefits of herd freedom. Who would want to go back to the brutal survival times of Shakespeare’s cousin?
Maybe we just need more trials and tribulations to get this herd freedom idea right? We have only been at it for a blink of history’s eye. In current twitter parlance, maybe we are in a global “twitter moment,” before our next great leap forward, being constrained by time, space and resources to find the next new herd-freedom coherence out of the bubbling sea of chaos being unveiled to each of us every day.
I know; you may be thinking that this is a lot of babble before getting to more pictures. Society has been trying to get this herd-freedom idea right for the past 9,750 years and in just the last 250 years (2.5%) have figured something out that seems to be working:

Representative democracy herds (nations) have risen from near zero to about 55% of all the world’s herds in the past 250 years. This historical trend is illustrated in the chart below along with the precipitous decline of dictator herds–the governing standard for humans since we became the dominant species on earth a million years ago.

(see my “Walking Stick” Twitter thread where this story was first created in linked tweets from a true random personal experience.) 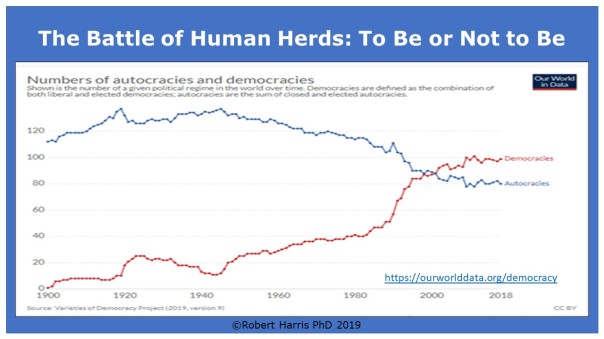 Human’s long history of LIFE surviving billions of years (in one form or another) proves that our growing problems have never been too big to overcome, including being hit by meteors and enduring ice ages. We Humans of today are not mindless and helpless, we are individually creative and smart with supercomputer brains and different talents that made all of us, as LIFE’S latest and most advanced species, evolve into Herds that is collectively a global supra-brain that’s way smarter than any one of us. That’s why we will continue to get through the rough patches of today and ones that are sure to come…if we continue to #ThinkVote.