2017 Donald Trump Tweet: My use of social media is not Presidential – it’s MODERN DAY PRESIDENTIAL 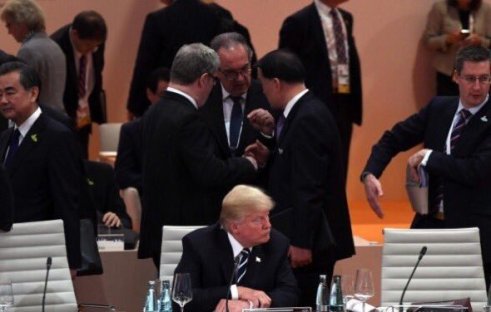 Any way you look at it, reality is a surprising mystery. Sure, we have some tantalizing glimpses of underlying order but for each door we open, we find two doors or more that are closed. And chaos is always lurking around each

corner.  That’s why one of the greatest joys of being alive is being together with others to share individual views of and experiences in reality. One of our deepest fears is being alone—all alone with no reference points share our views and experiences; if we are honest with ourselves, we know that different views exist that are worth knowing.

This is the primal conflict of existence that has been around since time immemorial.  It’s also the founding principle of America enshrined in our constitution: individual freedom in America for each citizen AND collective control of America by all citizens. This sounds like planned chaos and conflict! Was this madness or genius? The vote is still out.

An honest answer from history would probably be: “accidental genius.”It was “accidental” because the founders backed into using INNOVATION accidently as the cornerstone principle for how to organize and manage America. They did not chose the concept or word “innovation,’ they used “compromise” by cutting a deal between the core conflicting concepts of freedom and control—no kings or royal rule ever, whatsoever! The founders consciously adopted an existential conflict as America’s founding principle because freedom

was of paramount importance. In simple words, the founders “kicked the can down the road.”  This time-honored practice of congress, which actually kick-started America, is routinely criticized today. It could be a question of faulty memories, or simply overuse substituting for lack of will and innovation.

The founders’ genius was they made this accidental living system of self-governance work using a plainly-written constitution of principles and laws that could evolve as times changed, including getting rid of old laws that did not apply any more, and creating new ones for new situations that emerged from out of the blue and stayed for a while. This was genius; they knew not to try changing the wheels on a moving train! America’s founders created a political foundation built on acceptance of the idea that conflict of views are unavoidable, and designed a system able to rapidly adapt and resolve these conflicts based on shared understanding among most of its citizens. So far it has worked, and has always  produced progress and prosperity  for all in the long run.

Today our world is slipping out of balance into a new reality, driven in large part by new technology, and has not yet adjusted.  In response, America is experimenting with new ways of thinking, communicating, and building to find new solutions for our rapidly changing times. One of those experiments we decided to try is to elect a totally new kind of president, a hybrid, really, you, Mr. Trump:  A billionaire business man.

You made your money the old fashioned way buying and selling real estate, and became a modern business owner who is expert in branding and use of social media to manage your empire.  So far you are trying to do the job of president just like your businesses– alone but now using twitter almost exclusively to communicate one-way to the world.

Mr. President, with all due respect, you have to get down into the mud and engage with people, to refocus your considerable energy and intellect to listen, learn and act for the good of our country.  Please take a look at the above great presidents  and consider how they coped with disruptive change of their era.  Also take a look at the TED video below of MIT professor Terkle’s powerful insights from her research on how social media is changing society.  It has already been viewed by 4 million people.

We are all in it together Mr. President.  We American people always want our president to be great, and that includes you. We need you to succeed, and want you to become the greatest president ever.   To do so, you need to be more together-together &  less alone together.

1 thought on “Alone, Together”