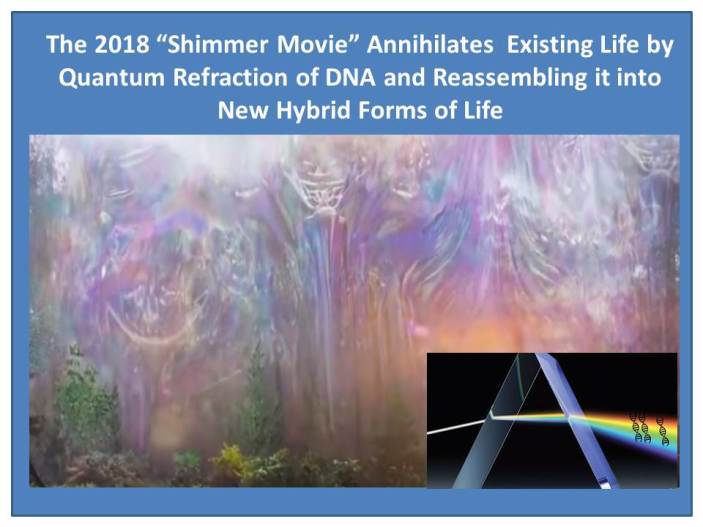 To me, the not-so-hidden allegorical meaning of Alex Garland’s ANNIHILATION movie is the reminder that all life is temporary and exists at some stage for some finite time on the ever-rotating wheel of creative destruction; Life at one level exists by consuming, or destroying, life that exists at a lower level.

In ANNIHILATION physics & biology blend into the dreamy reality of the “SHIMMER” to create an AI quantum refraction force that intermixes DNA from all life forms to not only create new life forms but to replicate existing human life. Is our fate to be “food” for another very different higher-than-us life form, or to evolve to become a newer and better next-higher version of ourselves?

I was fascinated to see Google’s creative whiz kids interact so respectively (almost in awe) of Garland in his wide ranging authentic 30-minute Q&A at Google. Check out this amazing 30-minutes of authenticity. A few of my takeaways are listed below.

So How did the Movie do at the Box Office?

Only okay, research tells me.

ANNIHILATION in 2018 cost $40 million to make and earned $43 million worldwide so far. Garland’s EX MACHINA in 2015 did better grossing $48 million on a cost of $15 million.  For comparison, ARRIVAL by Denis Villeneuve in 2016, earned $100 million at a cost of $47 million; and Villeneuve received an Academy Award for Best Director of ARRIVAL.

I liked all three movies but Garland’s two are my favorites in this list, which probably says more about me than their directors/writers. ARRIVAL is about an alien species with different language and space/time distortions set in a story of lost love recovered.

It is a remote possible reality so far removed from ours (except for the love story) to not be threatening, whereas Garland’s two movies are plausible extensions from who we are and might become based on what we know NOW of what seems possible.  This is called exploring plausible futures that complexity scientist Stuart Kauffman once described to me many years ago as the land of “The Adjacent Possible.”

This idea has stuck with me a long time, and so will Alex Garland ’s movies.

1 thought on “Annihilation – Survival Value of Movies for Life”